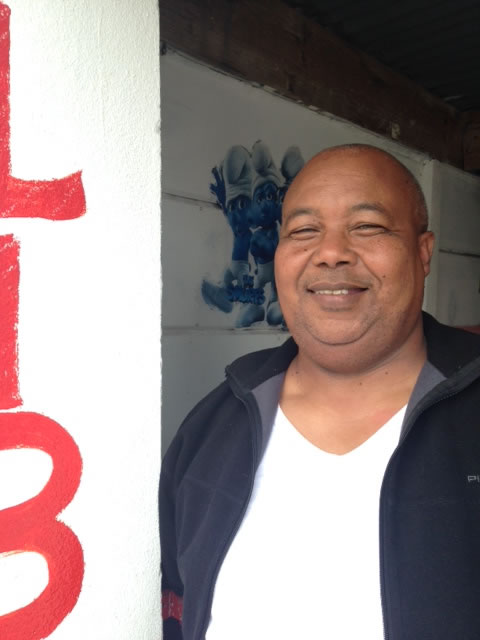 John Nicholson of Lavender Hill recently made the news, with the headline in the Daily Voice: “Man opens library for kids in backyard.”It’s a bit misleading. The library hasn’t just opened: since 2005, John has been welcoming children into his home to read. Every day after school, they gather in his converted garage to read stories, do puzzles, play games and do homework.

“This is their little safe haven,” he tells me. “If they come here in the afternoon, they must feel they are safe.”

When I visited John on a recent Tuesday afternoon, he gave me a tour of the library, housed in a 6×3 donated container from Breadline Africa.

“We don’t have a PC yet, so this our PC,” he laughs, gesturing to several shelves of encyclopaedias. He points out the dictionaries, the Afrikaans section, the children’s books. Over the last 12 years, his collection has grown from 22 books to a few thousand. He estimates that more than 200 children a week come to his home to read.

John also teaches out-of-school youth the basics of carpentry and upholstery; organises regular HIV testing in the community; and mobilises donations to feed the children a meal each Friday. His brother runs the sports arm of the project, where kids play soccer, netball, cricket and golf, and John is also collecting bicycles to start a cycling club.

Children started trickling in just after 14h30. After greeting “Uncle John”, one began working on the half-finished puzzle on the table, while two others grabbed books and settled in to read. I asked John how the project got started.

A lot of people look around and say, ‘Things could be better in my community.’ Why did you actually decide to do something about it?

When we moved here in 1999, before we got the container, I would see a lot of kids who were playing around and doing nothing, getting into trouble all the time.

Before this container was here, I would throw 2 or 3 blankets or duvet covers on the floor, and just invite kids from the area and ask them to come and read.

How did you decide where to start, when you wanted to make a difference?

Before I started this library, we actually started off as a soup kitchen. There’s a lot of unemployment and poverty in our area. Our feeding is still done once a week, on a Friday, depending on donations. If not, then I still see that they get a sandwich or apples. 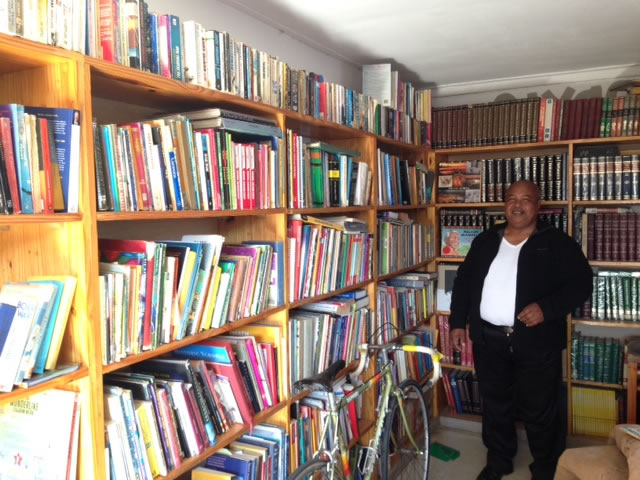 And then why did you decide to do reading, to have a library?

Reading? I just love reading. I read anything.

I used to spend a lot of time with both my sons, and just read to them. Not only stories. I would get a newspaper and sit them down and say, ‘Listen here. This is the good story for the day.’ I don’t read them the bad stories. But there’s good news.

Where did that first donation come from?

From Biblionef. The lady in charge of Biblionef, Jean Williams, we belong to the same church. She heard of what we were trying to do in the community and she said, “Okay, I’ll support it as far as I can. I can give you about 50 books.”

Then, Breadline Africa got on board, and they gave us a container. And then the books just started coming after that. So many other companies donated, I can’t even remember anymore. But I know the very first book that we started off is still very much alive, somewhere here.

So when you started the soup kitchen and the library, I’m interested in how people reacted. What happens when you start doing something in your community?

Positive. In fact, at the four primary schools in our area, I had some good reports from the teachers. They’ve come back and said, their reading has improved very much, and their discipline.

I’m very much into discipline. I don’t allow them to fight within these four walls. If one of them fights, everybody goes home. And I’ve had some good things said about their behaviour that has changed.

Have you seen people wanting to get involved, or taking action themselves, in response to what you’ve been doing?

Yes. A lot of people have come on board. Some of the parents will come and cook for us, make sandwiches for the kids. I allow them to come and assist with the reading if they have free time. And a lot of companies have promised that they would love to come on board too.

What does it mean to you, to have your home as this kind of a place?

I just love what I do. My ultimate aim is that my home must not only be a safe home, but a sort of haven for anybody that comes in here. That’s why my home’s full of children, always.

When they leave at four o’clock, the bigger ones come. Then I will sit with them sometimes here with homework ‘til six, half past six in the evening, on projects.

I so much want to have a PC so that we can have internet in the library, because our internet café is about 40 minutes’ walk from here. I go and get information for them, bring back that information, and then we sit here and finish. Next week somebody will come and say, I need to build a car, so we’ll collect boxes.

What advice would you have, if other people thought, “I want a home library, but I don’t know how to start?”